commercial property for sale in Mandaluyong 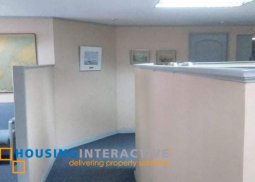 Commercial Property for Sale in Mandaluyong

Mandaluyong City is a first-class, highly developed city in the National Capital Region of the Philippines. In the 2020 census, it has a population of 425,758 people who live and enjoy their proximity to commercial locations in and around Mandaluyong City. Located exactly east of Manila, it is well-known for the Ortigas Center, a commercial and business center that is partly under the jurisdiction of Pasig City. The city is bounded by Manila to the west, San Juan to the north, Quezon City to the northeast, Pasig to the east, and Makati to the south. It is also the 6th-smallest city in the Philippines with a heart-shaped land area of 11.06 km2 (4.27 sq mi).

Places to Go to Within and Around Mandaluyong City

Talk about upscale shopping, “Shang”, as commonly referred to, offers a wide selection of high-end fashion brands and luxurious restaurants. It is a common go-to for the elite whose lifestyle is matched by its selection of superior goods and services in its well-planned retail zone.

This supermall is a favorite among the privileged and the mid-level society with a fast-paced lifestyle. Being located along EDSA gives its mall-goers ease of access whether they are coming from their apartments or condos around the mall. SM Megamall houses an enormous selection of restaurants, and fashion and services outlets. Residents of sold houses near SM Megamall enjoy the convenience of its proximity.

Food, fashion and beauty, health and wellness, leisure, art and entertainment. The Podium is a well-selected lifestyle haven strategically located in ADB Avenue, Ortigas Center. It offers a wide array of gourmet food spots and designer outlets. It houses art galleries for art enthusiasts and the like, a haven of books for the bookworms, and a world-class state-of-the-art cinema. It does not have as much foot traffic as Shangri-La Plaza Mall or SM Megamall, so it is lovely to hangout in this chic mall if one prefers a more spacious and peaceful mall strolling.

Once famous for the tall tale of the “snake man” in the basement, Robinson’s Galleria is a legendary EDSA Revolution landmark along one of the busiest intersections in Quezon City (Ortigas Avenue and EDSA). It is the flagship mall of Robinsons Land Corporation. It is a 5-level shopping mall that houses more than 500 highly recognized local and global brands, dining outlets, and service centers. Robinsons Galleria flawlessly complements the vigorous lifestyle of the white collared workforce, students and affluent residents of apartments and condominiums surrounding the area. For the past two decades, Robinsons Galleria has never ceased to enhance its facilities and in providing more options for its valued customers, and a new Galleria has been revealed through its latest mall developments. No wonder it has become the mall of choice in launching new products and in staging pioneering activities which bring together thousands of individuals from all walks in life. Employees and guests of surrounding institutions ensure captured markets for the Robinsons Galleria.

Why Do Business in Mandaluyong City?

There is a plethora of established companies like San Miguel Corporation and prominent financial institutions in the city particularly banks, which include the following:

Distinctive in cities in metropolitan areas, Mandaluyong has its own share of commercial strips and a central business district. The former, consisting mostly of banks, corporate offices and service establishments, stretch along public transport routes thereby serving both local consumers and passers-by from the neighboring localities. Major commercial strips of the city include the area of Boni Avenue, Shaw Boulevard, Libertad-Sierra Madre area, Kalentong, San Francisco, part of Martinez, Sgt. Bumatay towards Barangka Drive and Pinatubo towards EDSA. The city’s Central Business District on the eastern portion of the city is concentrated in the EDSA-Shaw-Pioneer Quadrangle. Prominent financial institutions and business centers are conveniently close to the houses and lots for sale in Mandaluyong City.

Dwellers of sold homes and apartments or those who work in any of the commercial establishments in Mandaluyong City can be reassured of a solid foundation for their children because of the prestigious schools that abound the city such as the Xavier School, De La Salle Greenhills, St. Pedro Poveda College, and University of Asia and the Pacific and OB Montessori Center. Other schools and universities in Mandaluyong City include:

·         Philasia School of Instrumentation and Automation

Complexity of History of the “Tiger City”

Long before commercial properties sprawled all throughout Mandaluyong, it was first recognized as a barrio of Santa Ana de Sapa, which was part of the District of Paco, Province of Tondo. Named San Felipe Neri by the Spaniards in honor of the patron saint of Rome, it was separated civilly from Santa Ana de Sapa in 1841. There are different stories on the origin of the name Mandaluyong, one speaks of how the place was abundant with a kind of tree called luyong, now more commonly known as anahaw (Saribus rotundifolius), from which canes and furniture were made as part of their commercial industry. Another claimed that the Spaniards named the place based on the report of a navigator named Acapulco, who saw the rolling hills frequently being lashed at by daluyong (“big waves from the sea”). This seems to confirm traditional pre-Hispanic stories that giant waves from the sea would meet the adjoining hills of the vast lowland, referred to as salpukan ng alon. Felix de la Huerta, a Franciscan historian, observed that the rolling topography of this land resembled giant waves of the sea.

Rep. Ronaldo Zamora sponsored a House Bill which eventually became Republic Act No. 7675 otherwise known as "An Act Converting the Municipality of Mandaluyong into a Highly Urbanized City to be known as the City of Mandaluyong." President Fidel V. Ramos signed R.A. No. 7675 into law on 9 February 1994 (the 49th anniversary of its liberation from the Japanese), which was ratified through a plebiscite on 10 April 1994 making Mandaluyong the 5th city in Metro Manila. In 2003, Mandaluyong was recognized as "The Tiger City of the Philippines" because of dramatic improvement in the city's economy.

Where to Buy a Commercial Property in Mandaluyong City?

If you want a strategic location for your business in the metro, check out the commercial properties for sale along Shaw Boulevard which offers a truly deliberate spot for clients with a magnificent and opulent lifestyle. Mandaluyong is about tranquility amid the busyness of a concrete city. This commercial property near high-end luxury condominiums, townhouses and executive villages is a development, one of the country’s top-notch property developers. It redefines city living, lets you grow with your consumers and in living spaces that improve dynamic lifestyle and support the well-being of every dweller. The commercial property sits against the backdrop of the world-famous Wack-Wack Golf and Country Club and is enclosed by major roads such as EDSA, Shaw Boulevard and Ortigas Avenue.

How to Get to Mandaluyong City?

You can get to the commercial properties in Mandaluyong City by bus or train, if you are going on a viewing of the commercial properties for sale. With buses mostly plying the main thoroughfare of EDSA, it is easily accessible from all points of the metro, but for tourists, the best way to get to Mandaluyong is by taxi or the MRT stations (Ortigas, Boni and Shaw) that run through it.

Is it Safe to Work There?

Mandaluyong is not called “Tiger City” for nothing. Regular monitoring for peace and order is the top priority of the local government of Mandaluyong City. Traffic police are active in maintaining the orderliness of the motorized traffic in all the routes within the city.

There is one commercial property for sale in Mandaluyong. The price for the property in the location is ₱15,000,000.